Today's Top Stories
1
I Discovered the Art of Long-Form Texting
2
There’s a Lol Typo on Cups for the Queen’s Jubilee
3
Getting a Heart-Shaped Pizza for V-Day Is the Move
4
Follow These TikTokers for All the Poly Content
5
The ‘Pam & Tommy’ Cast vs. Their IRL Inspirations 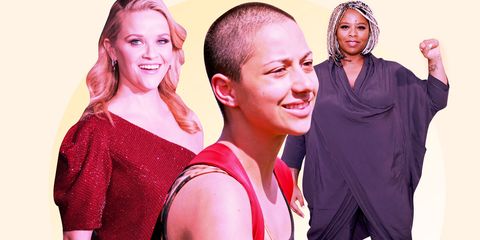 Here’s some good news this International Women’s day: The kids are all right.

Women today aren’t just feminists; we’re feminist-plus. While actively working for traditionally feminist causes, like reproductive rights and an end to sexual violence, women — and especially younger generations of women — are also spearheading some of the globe’s most important movements for religious freedom racial justice, economic equality, education, safety, and environmentalism. Women aren’t just working for themselves (or men); they’re taking the reins and leading, often bringing a feminist bent to causes that have long been dominated and led by men. Breaking out of the “women’s issues” pigeonhole is huge progress, and bodes well for a more feminist future.

Take the students of Marjory Stoneman Douglas High School in Parkland, Florida. After a fellow student went on a deadly shooting spree, like so many angry young men before him, the Parkland students refused to let their friends’ deaths be one more page in a book of “thoughts of prayers.” They jumped into action – much of it led by young women. Emma Gonzales, an 18-year-old senior, is one of the most visible faces of the Parkland revolt, writing an essay about gun control for Harper’s Bazaar, organizing protests and events, and amassing more Twitter followers than the NRA. When Parkland students spearheaded a national high school walk-out to protest lax gun control laws, organizers from schools across the country, many of them young women, joined in.

The Black Lives Matter movement continues to be led by women, standing arm-in-arm with men, but refusing to focus only on men.

Women and girls are also leading in education advocacy and racial justice. Marley Dias was only 11 when she started #1000BlackGirlBooks, a collection of reading material with black girl protagonists. Now, she’s 13 and an author herself. The Black Lives Matter movement was founded by Alicia Garza, Patrisse Cullors and Opal Tometi, and continues to be led by women, standing arm-in-arm with men, but refusing to focus only on men. The women of Black Lives Matter have insisted again and again on naming all of those killed by police with the #SayHerName hashtag, and keep the focus on the harm done to the entire community with African Americans are targets of state violence.

As the Trump administration threatens DREAMers, the young undocumented people who were brought to the U.S. as children and now may face deportation, it’s young women who are again leading organizations and organizing protests. United We Dream, a youth-led organization defending immigrant rights, is co-run by a young woman, and women hold leadership positions across the board. The organization’s advocacy director, Greisa Martinaz Rosas, is an unstoppable media presence, giving speeches and going on television to talk about her experience as a DREAMer. When Trump pushed through is refugee ban, it was female lawyers who flocked to airports to help newcomers in crisis, and were instrumental in fighting the ban in court.

Environmentalism has long had female proponents around the world, from Kenya’s Wangari Maathai to India’s Vandana Shiva to the American Rachel Carson. Marjory Stoneman Douglas High School is named after the woman credited with saving the Everglades. They’ve passed the torch to younger women, like Xiutazcatl Martinez, the teenage director of Earth Guardians in Colorado, and Deepika Krup, a 19-year-old scientist who invented a solar-powered water purifier that has the potential to save lives in developing countries. Young people, let by Martinez’s Earth Guardians, even sued the U.S. government over climate change, in a case called Juliana v. U.S.

We don't have to choose – we can be feminist environmentalists, anti-racist feminists, feminists for better gun policy.

And women are leading electoral politics as well, from the grassroots to the national stage. Indivisible, a group that has emerged as possibly the most influential and well-organized organization trying to funnel anti-Trump energy into organized, grassroots action has 50 percent female leadership. This year, more women than ever are running for political office: 575 women have thrown their hats in the ring for gubernatorial races or seats in the House or Senate.

Nor have women neglected feminism to focus on other causes. Instead, it seems like women don’t feel like we have to choose – we can be feminist environmentalists, anti-racist feminists, feminists for better gun policy. The #MeToo movement, unruly and loosely-organized as it is, has engendered organizing and tangible change that looks at the confluence of factors making women vulnerable to sexual harassment and assault. When Hollywood women made headlines accusing Harvey Weinstein and other powerful men in their industry of mistreatment, female domestic workers and farm workers spoke out in solidarity. “Enormous gratitude to the ALIANZA NACIONAL DE CAMPESINAS & the 700,000 female farmworkers they represent for their beautiful letter of solidarity with our industry,” America Ferrera tweeted. “We thank you. We stand with you.”

And they did. When women of Hollywood organized their response, called #TimesUp, they established a legal defense fund that would help those same domestic and farm workers demand fair treatment in their workplaces, too. Ai-jen Poo, who has worked tirelessly for the rights of domestic workers, went to the Oscars as a guest of Meryl Streep, and has used the moment to make sure traditionally marginalized women are heard. #MeToo founder Tarana Burke is also the director of Girls for Gender Equality, and while she says she’s glad for her work is getting more attention, that’s not the point. “Now that I have it, I’m trying to use it responsibly,” she said. “But if it hadn’t come along I would be right here, with my fucking Me Too shirt on, doing workshops and going to rape crisis centers. The work is the work.”

That so many of these women are young suggests this is the new normal, and that we’ll only see more women taking charge.

Women have always worked on a slew of important issues, and been instrumental in social justice movements. But too often, outside of specifically feminist “women’s issues,” we have been in the background, doing the quiet organizing and the largely invisible tasks while men held the microphone and took the stage. That is, after all, part of the reason second-wave feminism exploded in the 1960s and 70s: Women were frustrated with their second-class status in the anti-war and civil rights movements. Even well after the 1970s, men continued to take up most of the leadership positions not just in business, law, finance and politics, but in social justice movements, advocacy and activist organizations, and even student groups. Even with women outperforming men in high school and college, young men still dominate leadership roles: Women make up fewer than a third of student body presidents at the top 50 colleges. This sets men up for leadership positions and even electoral success down the road, while women get the message that we can be involved, but we should play supporting roles. No wonder many women say they don’t feel qualified to run for office, while men throw their hats in the ring.

That we are seeing so many women take the lead now – not just do the grunt work while men get the credit, but grab the mic themselves – is evidence of a sea change in progressive movements. That so many of these women are young suggests this is the new normal, and that we’ll only see more women taking charge and leading the way.

In the Donald Trump era, it can be tough to feel optimistic, especially on International Women’s Day – this is a president who has attacked women’s rights at every turn, mistreated women in his personal life (and boasted about it), and done great damage to women around the world. Luckily, these young female activists are here, and they’re loud, and they aren’t going anywhere. Finally, it seems, they’re going everywhere – and taking feminism with them.

Jill Filipovic senior political writer Jill Filipovic is a contributing writer for cosmopolitan.com.
This content is created and maintained by a third party, and imported onto this page to help users provide their email addresses. You may be able to find more information about this and similar content at piano.io
Advertisement - Continue Reading Below
More From Politics
The FDA Has Approved Abortion Pills by Mail
How You Can Help the Kentucky Tornado Survivors
Advertisement - Continue Reading Below
What to Know About the Mississippi Abortion Case
Fact Check: The Anti-Choice Agenda Is About Racism
An Abortion Care Provider on Life After SB 8
Women Are Tired of Being America’s Fallback Plan
Cecile Richards: “Ruth Would Want Us to Organize”
Texas Passes Most Restrictive U.S. Abortion Law
A Young Afghan Woman on Her Future
How to Help Haiti Earthquake Victims